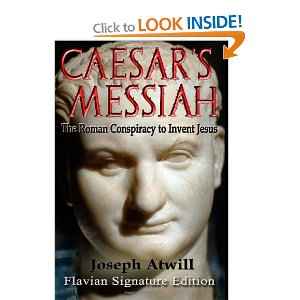 A month or so ago, I received an email from Amazon, the booksellers.  ‘We thought you might be interested in the following titles,’ it said. One of them was a series of lectures by Gerald Massey, a radical thinker of the early twentieth century, who claimed that Christianity was derived from the religion of ancient Egypt and was not simply a branch of heretical Judaism. I’d heard of Massey before and wanted some of his work, so I clicked on the link and decided to order the book. But, of course, they tempt you to buy more stuff, and underneath the information on Massey’s book it said, ‘Some of the people who bought this book also bought these’.  One caught my eye, Caesar’s Messiah, by Joseph Atwill.  I’d never heard of this book or its author, who makes an even more astonishing claim than Massey: Christianity, says Atwill, was an invention of the Flavian dynasty of Roman Emperors – Vespasian, Titus, and Domitian - in the second half of the first century A.D., in an attempt to convert the ever-troublesome Jews to a less warlike version of their religion. Naturally, I ordered this book too.
Both books arrived two days later, and when I’d read the first fifty pages or so of Atwill’s book, I thought to myself, ‘I must get into contact with this man. His ideas on the origins of Christianity seem even more radical than mine, and it would be good for us to compare notes.’  Later that day I went on to Facebook and discovered a little message to Rev. Ant Howe. ‘Dear Ant,’ it read, ‘thanks for the ad; I hope your back’s better’. Why this personal message to Ant had appeared on my Facebook page I have no idea, but what really astonished me was that the message came from ‘Joseph Atwill’. Well, I thought. That’s amazing. Ant knows this man, and, what’s more, he might even be a Unitarian. I immediately emailed Ant to ask for details. ‘Is the Joseph Atwill whose message appears on your timeline today the Joseph Atwill who wrote Caesar’s Messiah? If he is, I’d like you to introduce me to him.’  Ant replied, ‘No. I don’t move in such exalted circles. Joseph is a young man who’s just joined my congregation.’ I googled Joseph Atwill the author and found out that he is a middle-aged man who lives in America.
I mention this strange incident for the simple reason that I want to suggest that neither the coincidence nor Atwill’s theory will be of much interest to contemporary Unitarians, and, what’s more, that this lack of interest lies at the heart of our current decline. We have simply ceased to be radical thinkers. Centuries ago our forebears stood up against the tyranny of the majority and, in many cases, risked penury and even death in order to be true to their principles. They wanted the freedom to think and to worship as their conscience dictated. We claim the same freedom, but, alas, we’ve started to think just like everyone else. In fact, we’ve taken on the prevailing intellectual dogmas of our age with hardly a whimper of protest. Richard Dawkins would probably be more welcome in many of our churches than the Archbishop of Canterbury. We’ve become secularists and naturalists, rejecting the supernatural out of hand, dispensing with God, life after death, petitionary prayer, angels, and much of the rest of what our ancestors would have called religion. And, of course, we have no truck with fanciful theories about coincidences. These are just random events in a chaotic universe, which are endowed with meaning by the pattern-seeking mind. That I should become aware of two men called Joseph Atwill on the same day has no meaning whatsoever.  This would be our general Unitarian response. 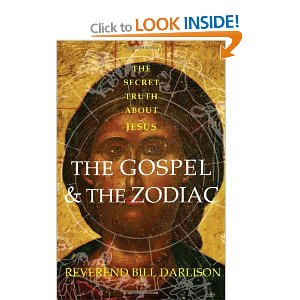 One day God decides to go for a walk. She (remember, this is a Unitarian version of the story!) dresses in her finest clothes and takes a stroll through the streets of a small town. A few days later, two of the townsfolk are talking about the event. ‘Did you see God the other day?’ asks one.
‘Yes I did. Didn’t she look lovely? I particularly liked her red hat!’
‘Her hat wasn’t red, it was blue.’
‘No it wasn’t. It was red. I saw it clearly with my own eyes!’
‘Well I saw it with mine and there’s no doubt about it: she was wearing a blue hat.’
The two continue to argue. Their language gets stronger. They begin to insult each other. Bystanders take sides, blows are exchanged and eventually there’s mayhem. At this point, God herself shows up. ‘What’s all the fuss about?’ she asks.
‘Some people say the hat you were wearing the other day was red, others that it was blue.’ This makes God smile. ‘They are both right,’ she says. ‘I was wearing my two-colour hat – red on one side and blue on the other!’ When this information is relayed to the warring sides, hostilities cease and all are amused at how this misunderstanding could cause such a commotion.

The moral of the story is pretty plain: our view of God is partial, and while we have got some things right, those who think differently could well be right too.
But this liberal, saccharine, Unitarian version of the story is a cop-out. The original story comes from West Africa; it’s a myth of the Yoruba people, and it concerns the god Edshu. When Edshu walks among the people he is wearing a hat with four colours – red, white, green, and black – and his presence provokes argument, even warfare, just as it does in the modern version. But at the end, when Edshu appears, he does not come as a reconciler, as one who points out that it is all based on a simple misunderstanding. Instead, he says, ‘These people could not help but quarrel. I wanted it that way. Spreading strife is my greatest joy!’[ii]
Why does he want to spread strife? Is it because he’s wicked? Does he enjoy watching people suffer? No. Like the Greek philosopher Heraclitus he realises that ‘strife is the mother of all things’. Like the Unitarian philosopher, Ralph Waldo Emerson, he realises that we can either have truth or repose, but not both. Like Jesus, who tells us that he has come not to bring peace but a sword,[iii] Edshu wants to wake us up, to force us out of our lethargy, with our cosy, non-threatening, inoffensive assumptions, so that we can present a genuine challenge to the tired but arrogant intellectual conventions of our time.
Here’s to the future, then. A dangerous, risky, exciting future, I hope, in which we, as a denomination, genuinely and fearlessly ‘bid the soul, in search of truth, adventure boldly and explore’.  It’s our only hope. If we persist with our current decaffeinated, bland inoffensiveness we are doomed. We may as well sell up now.