Showing posts from October, 2012
Show All

What if Jesus had been a Follower of Ayn Rand?

I’ve been reading Charles Dickens all this year. To celebrate the bicentenary of his birth in 1812, I determined to read all his novels, in the order in which they were written, starting with The Pickwick Papers , which he wrote in 1836 – when he was 24 – and ending with The Mystery of Edwin Drood, which he left unfinished at his death in 1870, aged 58.           I finished Bleak House a few weeks ago, but rather than continue with Hard Times , the next in sequence, I decided to have a break and read something by Ayn Rand, the Russian-American novelist and philosopher, whose name seems to be appearing all over the place at the moment, principally because Paul Ryan, Mitt Romney’s running mate in the forthcoming presidential election, has claimed that Ayn Rand is one of his sources of inspiration. Ayn Rand           Ayn Rand was born in St. Petersburg, Russia, in 1905, and died in 1982. She called her philosophica
7 comments
Read more 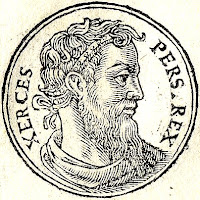 While reading the Greek historian Herodotus (484-425 BCE) yesterday (ah! the joys of retirement!) I came across a curious tale in Book IX of his Histories . It concerns King Xerxes (518-465 BCE) of Persia. He was married to Amestris, but he fell in love with the wife of his brother, Masistes, and in order to get closer to her, contrived to have his son Darius marry her daughter Artaynta. (Got that?) But, fickle soul that he was, Xerxes soon transferred his affections from mother to daughter. And for some strange reason, the young girl fell for him.             His wife Amestris had made a beautiful robe for Xerxes and he wore it one day while visiting his niece/lover, Artaynta. She happened to ‘please him greatly’ on this occasion (I wonder how?), and so he said that she could ask him for anything at all and he would give it to her. She wanted the robe, but Xerxes, scared of what his wife - who already suspected that he was up to something - might say, offered the girl ‘cities,
1 comment
Read more
More posts