Showing posts from September, 2013
Show All

Libra (1): Getting the Balance Right 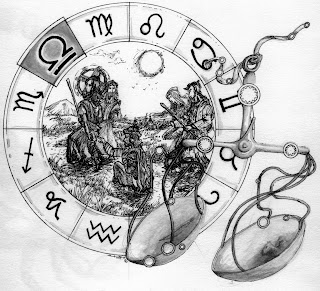 Libra 23 rd September – 23 rd October Libra, by Dan Hodgkin Libra, the Balance, is the sign of the autumn equinox , when day and night are equal. It is associated with relationships, marriage, and has been called ‘the sign of cosmic reciprocity’. Its ruler is Venus, the goddess of love. The Greeks called it Zugos,’ the Yoke’, and in Egypt it was represented by the goddess Ma’at, who judged the dead, weighing their souls in the balance: those who passed her test were said to be ‘light hearted’; those who failed were ‘heavy hearted’. Its decans are the Cross, the Victim, and the Crown. Mark 10:3-9 Jesus then left that place and went into the region of Judea and across the Jordan. Again crowds of people came to him and, as was his custom, he taught them. Some Pharisees came and tested him by asking, 'Is it lawful for a man to divorce his wife?' 'What did Moses command you?' he replied. 'They said, 'Moses permitted a man t
Post a Comment
Read more

Virgo (2): Beginner’s Mind Story: The Overflowing Cup A very clever University professor went to visit Nan-in, a Buddhist holy man. The professor wanted some advice on how he should live a spiritual life. ‘I have been studying for many years,’ he told the holy man. ‘I have read hundreds of books; I have sat at the feet of many gurus; and I have attended many different places of worship; but I have never found what I am looking for. So now I have come to see you.’ Nan-in looked kindly at the professor. ‘Would you like a cup of tea?’ he asked with a smile. ‘Yes, please,’ replied the professor. Nan-in prepared the tea and began to pour. The professor’s cup was filled to overflowing, but Nan-in continued to pour the tea until it spilled out on to the saucer, and then on to the table. ‘What are you doing?’ asked the astonished professor. ‘The cup is full. No more will go in!’ ‘Just like you,’ said Nan-in. ‘Your head is so full of theories, scriptures, ceremonies
Post a Comment
Read more
More posts