Here’s another of the numerous astronomical/zodiacal references in the Judaeo-Christian scriptures.

Pentecost Sunday, or Whit Sunday, considered by Christians to be the birthday of the church, was yesterday, 19th May. Pentecost means ‘fiftieth’, the fiftieth day after Easter, and since Easter always occurs when the sun is in Aries, Pentecost  always occurs around this date, when the sun enters Gemini. (Which it does this year on Tuesday, 21st May.) This is the time of year when the heat of the sun is:

not yet so equally diffused as when he shines directly down from his highest point of elevation, the summer solstice. In consequence of which the air is heated and rarefied, but partially, as over the sands of Africa; and over all those parts of the earth which reflect heat. So that the surrounding denser air, rushing in, in consequence causes those rushing mighty winds, which render the month of May full often peculiarly unpropitious to human health'. (Rev. Robert Taylor: The Devil's Pulpit)

This time of year is hurricane season, and, tragically, the tornado which devastated Oklahoma occurred on May 20th 2013.

The story of the first Christian Pentecost, when the Holy Spirit or the Holy Wind (pneuma in Greek means both 'spirit' and 'wind') comes upon Jesus's followers like a violent wind from heaven, is told in Chapter 2 of the Acts of the Apostles, and is full of Geminian references, all of them ignored by conventional commentators, particularly by those who think the story has some kind of historical basis. 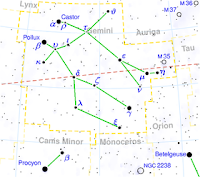 The principal reference is to the Greek myth of Castor and Pollux, the twin stars of Gemini. Castor and Pollux were oviparous, born from eggs laid by Leda, the swan, after she had been seduced by Zeus. Their helmets (without which they are rarely depicted) were considered to be the remains of their birth eggs. Apollonius of Rhodes (3rd century BCE) tells us that Jason's Argonauts were saved by Castor and Pollux and that ever after they became the patrons of seafarers. Sailors believed that they appeared in the ship’s rigging in the form of what we now call St. Elmo’s fire, an electrical phenomenon which produces  a bright blue or violet flame-like glow on the top of tall structures like ships' masts, and which is often accompanied by a distinct hissing or buzzing sound. The phenomenon was mentioned by Pliny (first century CE) in his Natural History: On a voyage stars alight on the yards and other parts of the ship. If there are two of them, they denote safety and portend a successful voyage. For this reason they are called Castor and Pollux, and people pray to them as gods for aid at sea. (Book 2: para 101)
﻿ 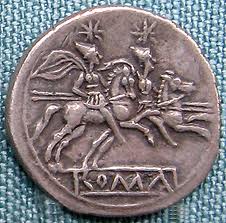 Castor and Pollux are generally shown with flames of fire playing round their heads, as in this Roman coin from about 150 BCE.

In the light of all this, what are we to make of this passage in Acts 2?

When the day of Pentecost came, they were all together in one place. Suddenly a sound like the blowing of a violent wind came from heaven and filled the whole house where they were sitting. They saw what seemed to be tongues of fire that separated and came to rest on each of them. All of them were filled with the Holy Spirit and began to speak in other tongues as the Spirit enabled them.

﻿
Gemini, ruled by Mercury, is associated with duality, splitting (the tongues of flame were said to be διαμεριζόμεναι, - 'cloven', 'separated') with communication in general and language in particular, which helps explain the next part of the story, in which the apostles seem remarkably polyglot, preaching in such a way that people from all over the known world were able to understand them.

In chapter 1 of Acts we are told that the company is sitting in an ὑπερῷον -  'hupero-on'; this is translated as 'upper room', but the Greek literally means 'the egg up above'. So, just as Castor and Pollux are born from a egg, so is the church.

(Incidentally, when we know that Castor and Pollux, the Gemini Twins, were the patrons of seafarers in the ancient world, we can understand why the writer of the Gospel of Mark introduces the Gemini section of his Gospel - 4:35-6:29 -  with the story of the Calming of the Windstorm on the Sea of Galilee.)